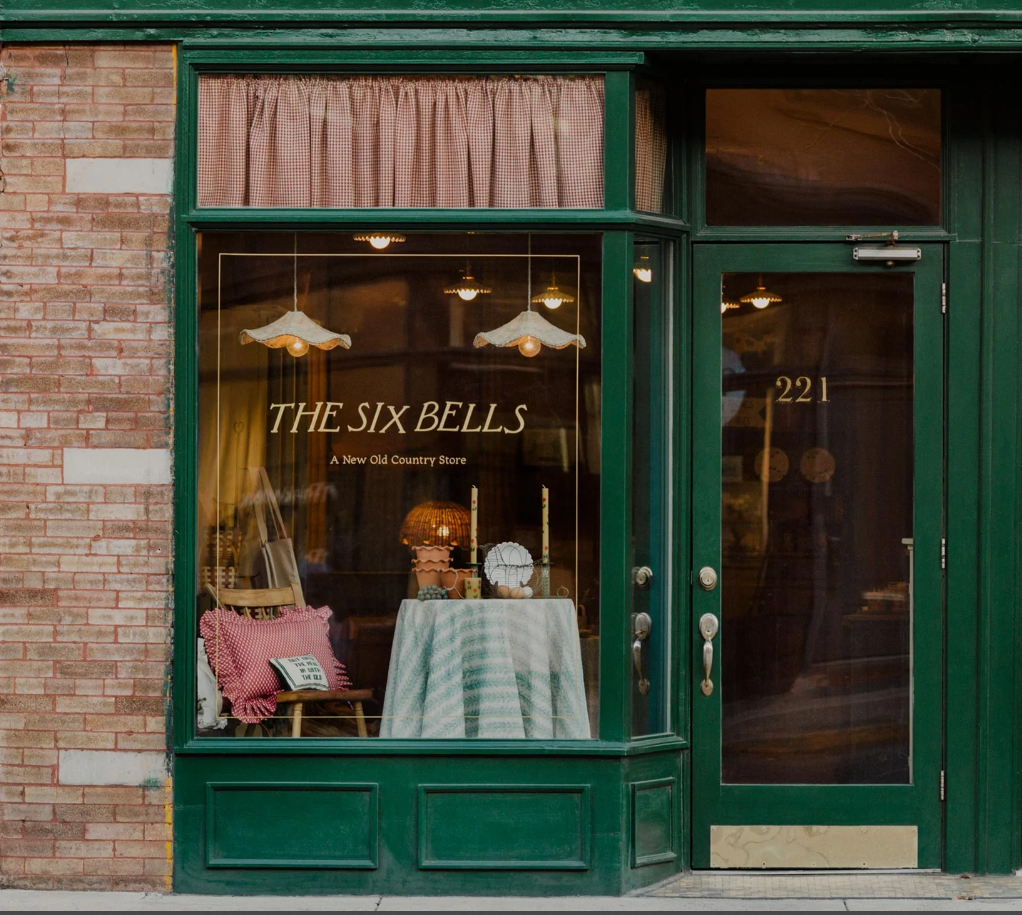 Imagine a little world far away where the pace of life is slower, Lords and Ladies take tea in parlours, the village sheep roam freely and poison pen letters are the biggest cause for scandal.

Dream it into being, plop a twee homewares store in the middle, and you’ve stumbled upon The Six Bells in the fictional town of Barrow’s Green.

In reality, The Six Bells is smack bang in New York City. The store, and the brand story world it’s wrapped in, are the brainchild of Audrey Gelman. The name might not be familiar to Aussies and Brits, but in the US Gelman is well-known as the founder and former CEO of the all-female, mostly-millennial workspace The Wing.

Audrey’s star was rising (she counts Hillary Clinton and Lena Dunham as acquaintances) when she was forced out of The Wing in 2020 following accusations that the company allegedly mistreated women. Her subsequent reinvention from power CEO to salt-of-the-earth shopkeeper is well-told elsewhere (read this fascinating piece in Vanity Fair).

My interest in Gelman’s journey was sparked when I stumbled across the ye olde worlde story world she created for her new business venture. 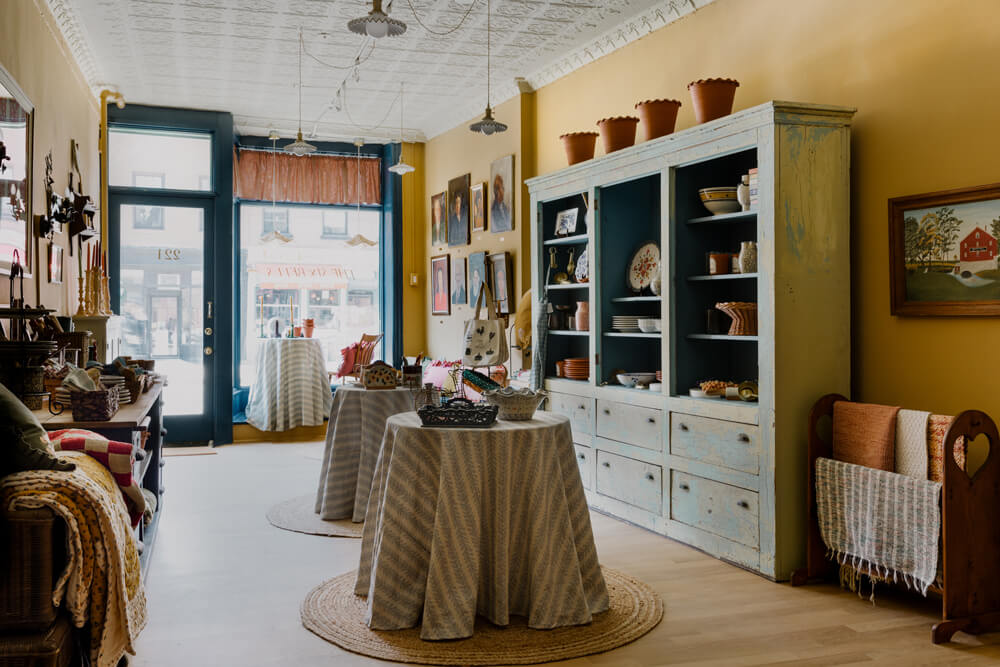 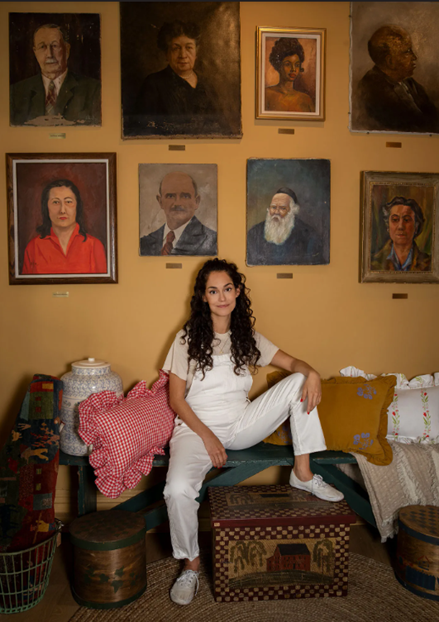 The Six Bells’ tagline is: ‘a country store of homewares that come from a little world far away’.

Step inside the bright green door of The Six Bells (or head to the website) and you’ll discover a curated selection of homewares selling a romanticised version of rural life from the past. Think bramble-print plates that a Jane Austen character would serve scones on, or a patchwork quilt fit to warm the Famous Five as they take a break from midnight adventuring.

This type of décor is known as ‘cottagecore’. It’s been enthusiastically embraced by millennials as an antidote to the hustle culture that previously drove them. It’s fitting then that Audrey Gelman, former poster girl for the millennial boss/bitch babe movement, has switched direction and is leading a trend that feels a lot more wholesome (while being no less commercialised!).

Her personal brand has also been relaxed to match her new business; you can bet that the white overalls didn’t get an outing at The Wing.

Audrey Gelman, photographed in her newest venture, the Six Bells, in Brooklyn in June.PHOTOGRAPH BY GILLIAN LAUB.

The Prelude: Building a world

To create a story fit for this new era in business, Audrey has invented an English-inspired town called Barrow’s Green. She’s included its main locations and buildings, including The Six Bells, plus a colourful cast of characters who live, work and shop there.

While the concept is fun, the writing isn’t going to win any literary awards. The characters are unoriginal, and the hinted-at plot lines – an illicit unrequited love interest, a town gossip, and poison pen letters – are a pastiche of recent Netflix shows and literary classics. Having lived in London for 12 years (with a British passport, English grandfather, and relatives dotted around the countryside), to me the story reads as a very American vision of what England used to be!

Despite my own reservations about the quality of the storytelling, I can’t deny that I find the overall concept charming in the context of a backstory for a homewares business.

Exploring the story and characters 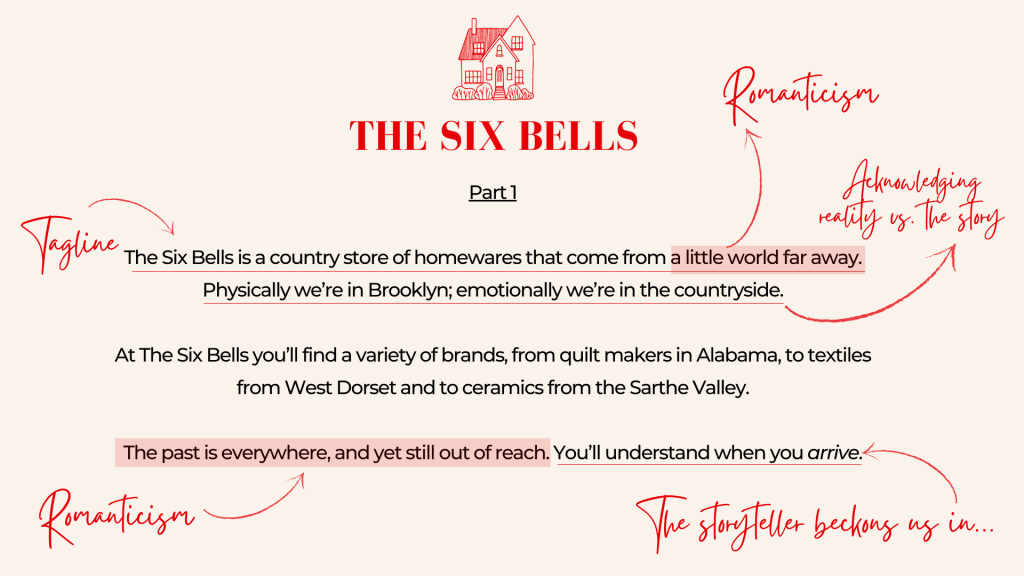 The first part of the story speaks to the heart of the business by using the tagline: The Six Bells is a country store of homewares that come from a little world far away. It also addresses the location of the shop (perhaps to avoid reader confusion about whether it’s actually located in the countryside or not!); and it cleverly sets up that dichotomy of city-country – so you know that although it may be based in the city, their heart is still in the outdoors.

The second sentence is is pure practicality. Readers are told what the shop sells. This is Audrey’s one nod to a typical ‘About Us’ business story.

The third piece pulls us back into the emotion of the brand world. It offers a little sprinkle of magic, by evoking a past that exists in our present, though tantalisingly untouchable. The final sentence reads like a finger, beckoning us to come in and read further.

The next section is most fun – it’s where the story world is built. The text conjures a vision of a romantic English village hamlet. Residents play cricket on the village green, yearly fetes are held where one can imagine home-made jams and quilts are sold, and sheep and thatched roofs lend an air of innocent, bucolic countryside. 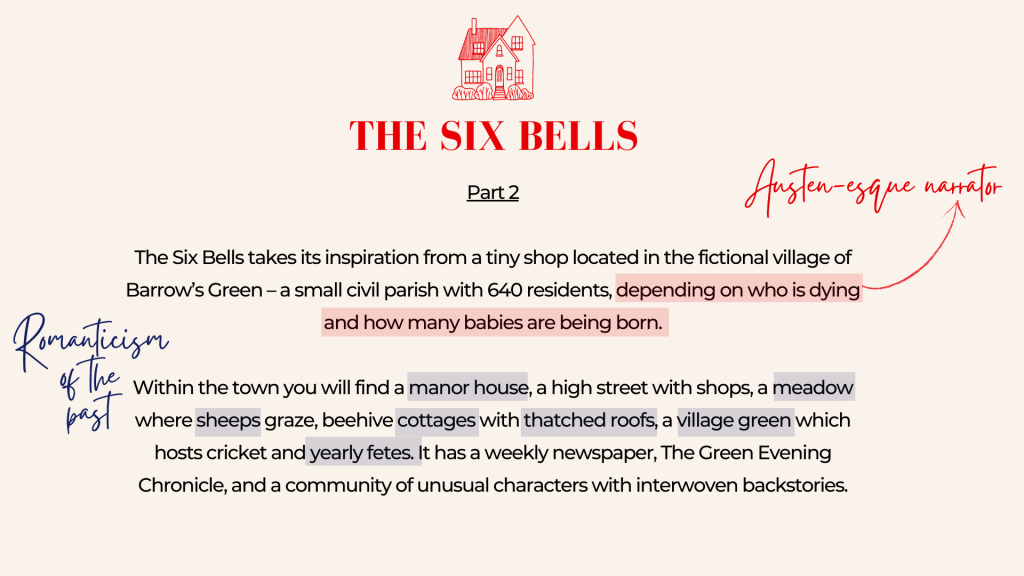 By hovering over an online map on the website, more juicy, though rather innocent, details of the local sights and townsfolk are revealed! The map is a watercolour commissioned by Gelman, and it also hangs in the shop. 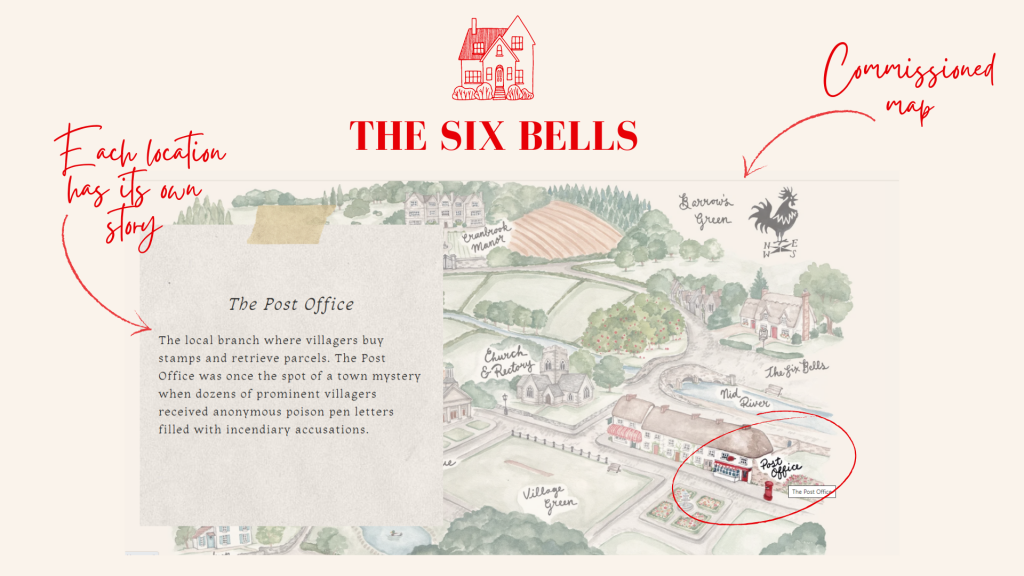 Meet the characters of Barrow’s Green

The inhabitants of Barrow’s Green each have their own backstory, and are inspired by original oil paintings Gelman collected over the years. The characters are united by secrets, an underlying suspicion of each other, and a desire to maintain the status quo. 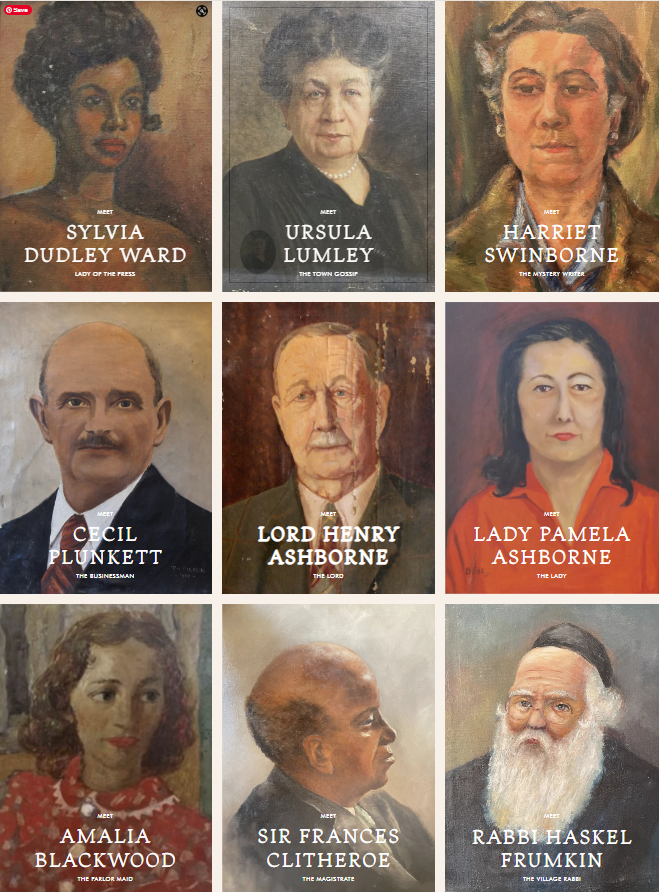 The stories are written in a whimsical, historical style to suit the genre and time of the story. Visit the website and discover them for yourself. 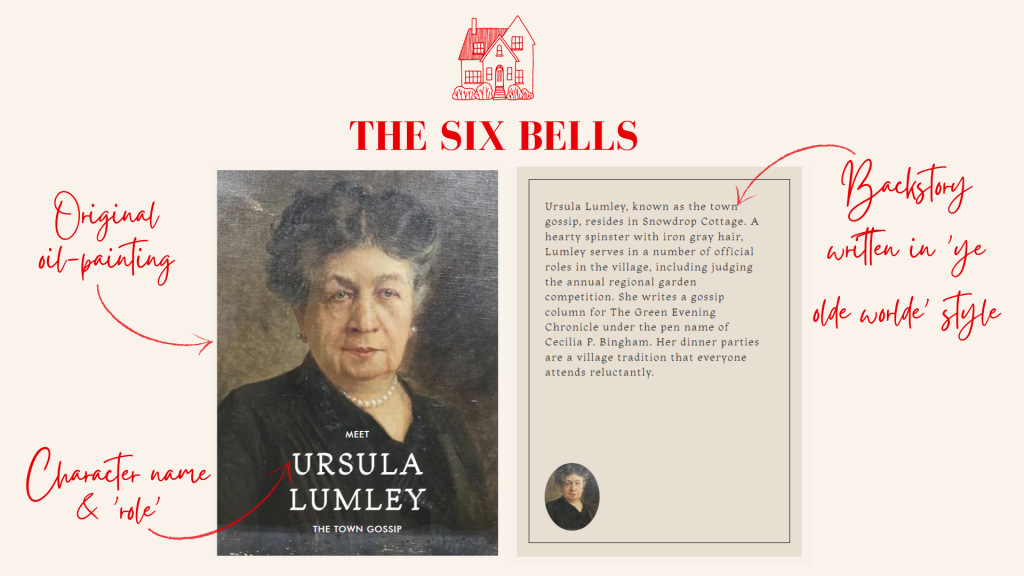 How could Gelman elevate her brand storyworld in her marketing?

As a piece of imaginative writing and design, Barrow’s Green is a fun concept. But the conceit ends at the website and on the wall of the shop where the paintings are hung.

Although the story reflects the shop’s interior design and objects, it’s not played out anywhere else through the business. Gelman could bring the characters to life across different strands of her marketing, to really reinforce the uniqueness of the brand world she’s created.

My tips would be to:

Why does the brand story world work?

Gelman’s had a bit of backlash on Twitter for the shop. Mainly, people are outraged that she’s charging so much for candles and cushions that could be bought for half the price elsewhere. But that’s the strength of a fantastic brand story: it confers additional power onto the thing you’re selling. Customers aren’t just buying a candle, they’re buying into an entire experience. The brand story world is an essential part of the business mystique. 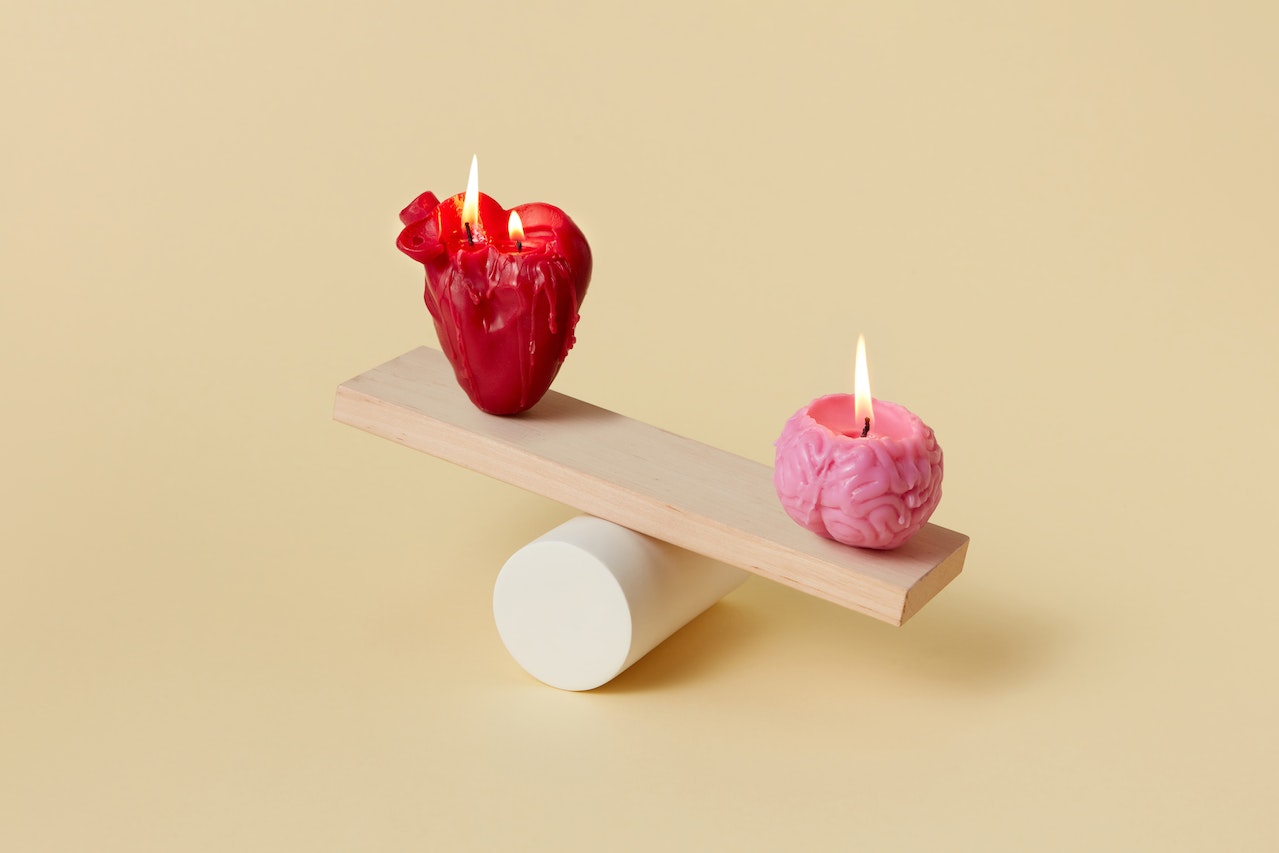 How to leverage neuroscience to tell engaging stories 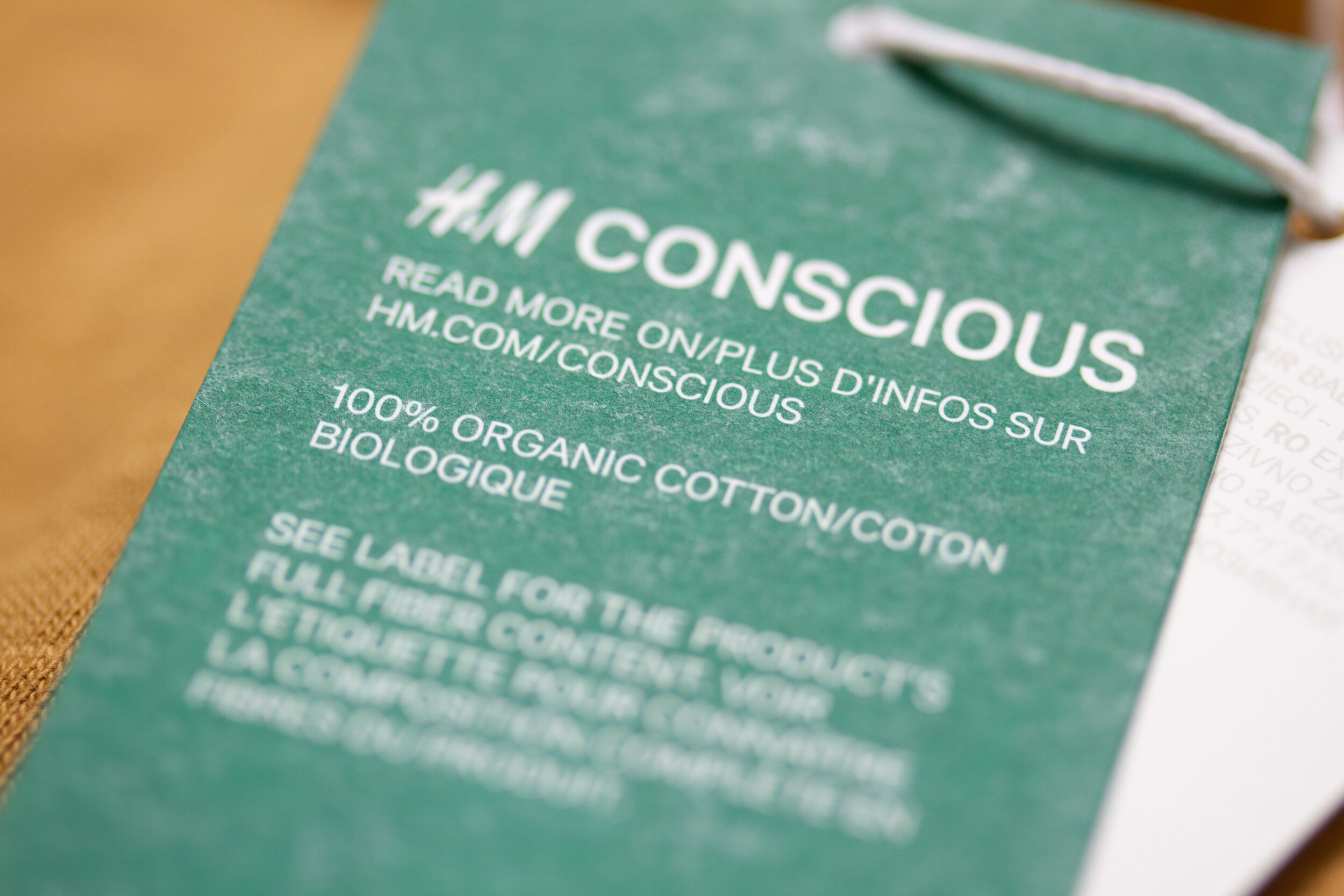 Seven tips to avoid greenwashing and social washing in your marketing